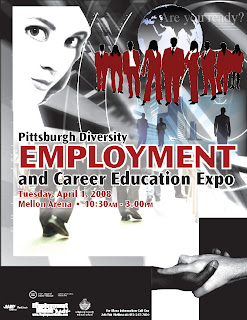 The Pittsburgh area’s next big Diversity Job fair will be on April 1st at the Mellon Arena from 10:30AM to 3:00PM. The job fair is free and open to the general public. No registration is required. Enter at gate 10. We suggest if you drive to park in the east parking lot on the Center Avenue side of the arena (all day parking is just $6.00). With over 35 companies and career training schools in attendance, job seekers will find hundreds of local Pittsburgh job opportunities and information on dozens of career raining opportunities.

It is highly suggested that all job seekers brings a supply of resumes (10 or more) and to remember that how they dress will greatly influence their chances of employment success.

This job fair is the first Diversity Job Fair in Pittsburgh to be held in collaboration with The Urban League of Greater Pittsburgh, AARP Foundation Work Search and the Allegheny county Department of Veteran’s Affairs. Companies attending are letting it be know they are equal opportunity employers looking for the most qualified candidates regardless of race, age or veteran status.

The companies in attendance so far include: 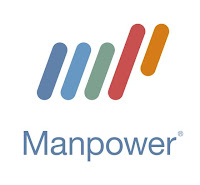 35% of Pittsburgh area employers plan to expand payrolls in the 2nd quarter, according to the Manpower Employment Outlook Survey released today. Only 5% plan to reduce payrolls, according to Manpower spokesperson Kelly Scott.

“Compared with the first quarter of 2008 when 20% of companies interviewed intended to add employees, and 15% planned to reduce staff levels, area hiring levels appear to be stronger,” said Scott. “Employers are more optimistic about hiring activity as compared to one year ago, when 29% of companies surveyed planned to increase staff levels and 9% expected to cut payrolls.”

Harold Miller, President of Future Strategies, LLC, and author of Pittsburgh’s Future wrote an excellent article for the Pittsburgh Post Gazette recently explaining why the Pittsburgh area is still offering good opportunities to job seekers even though the job growth rate is considered anemic.

Mr. Miller writes:
Plenty of Job Opportunities, Despite Slow Growth
Over the past several years, the Pittsburgh Region has had one of the slowest rates of employment growth among major U.S. metro areas. Does that mean young people need to look elsewhere to find a job?
Fortunately, the answer is “no.” You might be surprised by how much hiring goes on in the Pittsburgh region despite the slow growth. In 2006, while total regional employment grew by only 5,000, there were over 624,000 new hires by employers in the region, according to data from the U.S. Census Bureau. (This does not include people promoted to a different job with the same employer, or those returning to work after a temporary layoff or unpaid leave.)
That’s not a mistake – there were over six hundred thousand jobs for which new people were hired. How can that be? Because a similar number of people also left jobs during the course of the year. Some retired. Many were laid off or fired. But most left voluntarily to find better or different employment. Nationally, the majority (58%) of separations are voluntary quits, rather than layoffs, discharges, or retirements.
A regional labor market is like a very large game of musical chairs – at the end of each month or year, the total number of jobs may not have changed very much, but a huge amount of movement has happened in between.
Nationally, employers reported that just over 3% of their jobs were open each month during 2006. That means that in the Pittsburgh Region, with over 1,100,000 total jobs, there will likely be over 33,000 job openings at any point in time.
Many of the job hirings are temporary. People are hired in retail stores during the holiday shopping season, in amusement parks in the summer, on short-term construction projects, etc. But even if you look at what are called “stable jobs” (a job that lasts at least one quarter), there were over 350,000 new hires in the Pittsburgh Region during 2006.
What kinds of jobs are these? About one-third are in retail stores, restaurants, bars, and hotels. Many of those are part-time jobs, and the wages are, on average, very low. But if you exclude those industries, you find that in 2006, nearly 250,000 people got new jobs paying an average of $30,000 per year, in sectors ranging from health care to finance.
And many jobs were filled at much higher wages. For example, there were over 25,000 people hired in corporate headquarters, R&D centers, law firms, and other professional firms in 2006, at an average salary of almost $45,000. (Some people may take multiple part-time jobs or change jobs multiple times during the year, so there is some double-counting in these numbers.)
Even though the total number of manufacturing jobs in the Pittsburgh Region declined slightly in 2006, there were almost 25,000 new hires in manufacturing that year, at an average monthly wage of $3,000 ($36,000 annually). And many of our manufacturers are reporting difficulties filling vacant jobs, so there are probably more job openings than the number of hires would suggest.
Are young people getting any of these jobs? Yes. Thousands of them, in fact. During 2006, nearly 40,000 stable jobs were filled with men and women ages 22-24. For example, 1,800 22-24 year olds were hired in manufacturing, at an average wage of over $25,000, and 2,500 were hired in professional, scientific, and technical services firms, at an average salary of $28,000.
And if you think there are more job opportunities for young people in fast growth regions, think again. For example, although Austin, Texas created over six times as many net new jobs as Pittsburgh in 2006, more 22-24 year olds found jobs in high-paying industries here than in Austin.
Does this mean that slow job growth in Pittsburgh isn’t a problem? Hardly. We can’t increase our population if we don’t increase total jobs, and we can’t support big-city amenities like our arts and cultural organizations, airport, etc. without a growing population base.
But while we’re working to make the region more competitive for business growth, let’s spread the word that there are thousands of good job opportunities here right now.
at 3:18 PM No comments: