CareersInGear.com Now The Largest Driver/Mechanic Job Board in North America 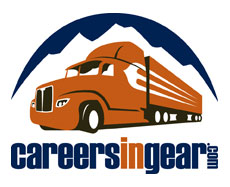 With over 300,000 unique visitors per month, CareersInGear.com has become the main resource for the truckiing industry to recruit drivers and mechanics.

As the stringent safety requirements of the federal government's CSA 2010 take effect this January 1st, companies will be held accountable for the safety records of their drivers, possibly resulting in thousands of current drivers losing their jobs due to safety or health reasons.

This, along with the current shortage of drivers nationwide now estimated at over 150,000, will make recruiting and hiring drivers more difficult.

For job seekers who haven't before considered getting a commercial drivers license (CDL) this is an opportunity to find employment that pays well ($40,000 to $75,000 per year) and offers great benefits like healthcare and retirement plans.

Job seekers can go to www.CareersInGear.com to search current openings while recruiters can call 412-257-7801 for more information on recruitment programs.
at 11:12 AM No comments: 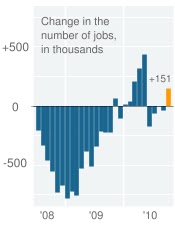 U.S. added jobs for first time since May
August and September revised up a combined 110,000 jobs

More than doubling predictions, Economists had predicted 70,000 to 100,000 jobs added. Strength was primarily in the service sector, as manufacturing lost 7,000 jobs although manufacturing work weeks and pay both increased.

While positive news, many more jobs will have to be added per month to start reducing the unemployment rate.  See more details here.
at 8:57 AM No comments:

First time since 2007 no year over year increase

HARRISBURG (NOVEMBER 2) – The seasonally adjusted unemployment rate in the seven-county Pittsburgh Metropolitan Statistical Area (MSA) was down three-tenths of a percentage point in September to 7.9 percent. The MSA’s rate was 1.1 percentage points below Pennsylvania’s rate (9.0%). The last time the Pittsburgh MSA rate was that far below the state rate was June 1978. The area rate was also lower than the national rate of 9.6 percent. The Pittsburgh MSA’s unemployment rate matched last September’s rate. This was the first time since November 2007 that the area rate did not show an over-the-year increase.

Unemployment rates decreased from August in six of the seven counties in the Pittsburgh MSA. Butler County posted the lowest rate in the MSA at 7.4 percent while Fayette County held the area’s highest rate at 9.6 perent. Among Pennsylvania’s 67 counties, unemployment rates ranged from 6.1 percent in Centre County to 14.3 percent in Cameron County.

Goods-producing jobs in the Pittsburgh MSA declined 500 in September to 147,600. Manufacturing was down 200, the smallest September decrease for the supersector since 1999.

Goods producers added 800 jobs from last September. Mining & logging was up 500 jobs over the year (9.1%). Manufacturing continued to show an over-the-year decline, but it has been consistently shrinking since last September.

Service-providing jobs were up 9,300 from August. The majority of this increase was due to seasonal education-related gains. Education & health services, state government, and local government all added jobs as the new academic year began. Seasonal declines occurred in retail trade, professional & business services, leisure & hospitality, and other services. The federal government decline of 500 was due mainly to the census nearing completion.


Service providers had 6,200 more jobs than in September 2009. Education & health services and professional & business services experienced the largest over-the-year gains in the area.
at 9:01 AM No comments: