Total nonfarm payroll employment rose by 243,000 in January, and the unemployment rate decreased to 8.3 percent, the U.S. Bureau of Labor Statistics reported today. Job growth was widespread in the private sector, with large employment gains in professional and business services, leisure and hospitality, and manufacturing. Government employment changed little over the month.

Private-sector employment grew by 257,000, with the largest employment gains in professional and business services, leisure and hospitality, and manufacturing. Government employment was little changed over the month.
Professional and business services continued to add jobs in January (+70,000). About half of the increase occurred in employment services (+33,000). Job gains also occurred in accounting and bookkeeping (+13,000) and in architectural and engineering services (+7,000).

Employment in retail trade continued to trend up in January. Job gains in department stores (+19,000), health and personal care stores (+7,000), and automobile dealers (+7,000) were partially offset by losses in clothing and clothing accessory stores (-14,000). Since an employment trough in December 2009, retail trade has added 390,000 jobs.
In January, employment in information declined by 13,000, including a loss of 8,000 jobs in the motion picture and sound recording industry.
In the goods-producing sector, manufacturing added 50,000 jobs. Nearly all of the increase occurred in durable goods manufacturing, with job growth in fabricated metal products (+11,000), machinery (+11,000), and motor vehicles and parts (+8,000). Durable goods manufacturing has added 418,000 jobs over the past 2 years.
Employment in construction increased by 21,000 in January, following a gain of 31,000 in the previous month. Over the past 2 months, nonresidential specialty trade contractors added 30,000 jobs.
Mining added 10,000 jobs in January, with most of the gain in support activities for mining (+8,000). Since a recent low in October 2009, mining employment has expanded by 172,000.

Government employment changed little in January. Over the past 12 months, the sector has lost 276,000 jobs, with declines in local government; state government, excluding education; and the U.S. Postal Service.

The average workweek for all employees on private nonfarm payrolls was unchanged in January. The manufacturing workweek increased by 0.3 hour to 40.9 hours, and factory overtime increased by 0.1 hour to 3.4 hours.
at 4:33 PM No comments:

Pittsburgh Unemployment Down to 6.9% in December


Over the year, the Pittsburgh MSA’s unemployment rate was down a full percentage point, while Pennsylvania’s rate and the national rate were both down nine-tenths of a percentage point.


Among Pennsylvania’s 67 counties, unemployment rates ranged from 5.1 percent in Centre County to 11.5 percent in Cameron County.


Leisure & hospitality and education & health services supersectors incurred the largest over-the-month declines, down 900 jobs each. Both declines were expected as leisure & hospitality generally shows a sizable decline in December, and education & health services typically experiences a reduction in employment due to the ending of the fall school semester.


Over the year, education & health services (+10,400) and trade, transportation, & utilities (+7,700) have provided the greatest job growth, while government (-1,000) and information (-200) have experienced the largest employment declines. 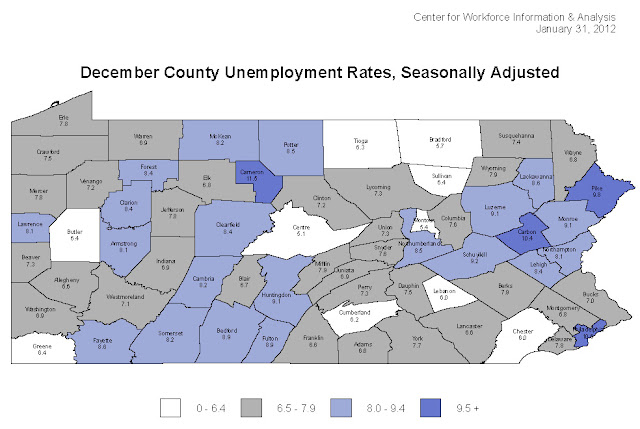